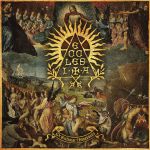 French Doom Metallers ECCLESIA were founded in 2016. After their self-released “Witchfinding Metal Of Doom” EP in 2017 they are now back and released their debut album “De Ecclesiæ Universalis”, in co-operation with Aural Music. Musically they play Doom Metal and sometimes Epic Doom, even if the vocals and the speed are a bit quick at times. But the Doom essence is strong here, which can be realized from the opening introduction, ‘Ex-Communicamus’, where the voice of Arnhwald is really empowering. A voice that transforms and evolves according to the requirements of each song incoming, where he delivers like an angel, a demon, an inquisitor or a spectator from that dark era. ‘Ecclesia Sathani’, ‘Behold The Heretic Burning’, ‘Antichristus’ and ‘God’s Trial’ all carry this fascinating rendition by Arnhwald. This was made possible by the two guitarists, The Witchfinder General and Conrad The Inquisitor, as their riffs are doomy, heavy, powerful and always flowing. The bass is, fortunately, easy to hear and contributes the heaviness to the overall sound of the string fraction. Drummer The Priest (for real!) plays precisely and knows how to please with his crisp controls. Also, the sacred motifs are often included here musically, with fantastic effect of Organ music, short clips and intros in many effective movements and transitions of ten tracks, ranging just over 40 minutes. Take ‘Montségur’, which is delivered with an effective balance between melody, catchy riffs and the heaviness, darkness and gloomy side of this music to resurrect history. As Montségur, possibly depicts “Château De Montségur”, which was one of the last strongholds of the Cathars, which was a dualist medieval religious sect in Southern France, flourished in the 12th century and rejected the Catholic Church as part of the material world. Surely this highlighted the band’s music and purpose. The surprising edition of a cover version of VENOM’s classic ‘Don’t Burn The Witch’ gave an ominous aura to the whole record. Finally, with church bells and the outro ‘Ite Missa Est’, the listener is released from the Middle Ages. A properly chosen cover artwork rounds off the overall package optically and should entice any followers of this genre to explore ‘De Ecclesiæ Universalis’ repeatedly. Explore more about the band and label here: www.facebook.com/ecclesia.official, www.facebook.com/auralmusicgroup.