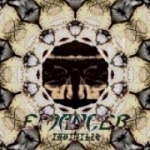 Never heard of this Norwegian two-piece before, but according to their info sheet, "Invisible" is already their third album, following "Utopian Illusions" (on Extremist Records in 2001) and "The Human Experient" (Black Owl Records, late 2002). They originally started out as UTUMNO, released a demo named "Morkets Rike" in late 1997 and another one ("Syn Av Ei Ukjend Tid") about a year later. In the summer of 2000 they finally went for a name change and settled for EMANCER ever since. Even though they are rooted in this genre, EMANCER is not your typical Norwegian Black Metal act though, but a rather experimental one which might cause some headache to the "true" diehards. Their music is full of variation and has a lot more to offer than your usual Black Metal releases. Moody parts, that are often accompanied by synths, get replaced by hyperfast extreme outbursts of aggression and several breaks and unusual elements keep their overall writing pretty interesting. The band’s basic style is obviously a lot more inspired by ordinary, yet very hard hitting Metal as opposed to the usual BATHORY, DARKTHRONE type of sound. Instead of coming up with the typical ice cold "production", EMANCER prefer to let their creations shine in a really powerful and crushing light. The vocals are very grim, but luckily never sound ridiculous nor shrieky and the album’s overall rawness reminds me a lot on CARCASS’ "Heartwork" classic, even though EMANCER musically act in a completely different way. Yes, a very interesting record indeed! Unfortunately the whole packaging of the disc sucks big time and the use of a drum computer (programmed in a quite decent way though) should be avoided in the future as well. Band contact: www.emanceronline.com, Label contact: www.goldenlakeprods.co.uk