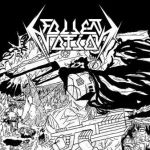 FALLEN NATION is a Russian Speed / Thrash Metal quartet. They were formed in 2011, which makes me wonder why they waited 6 years to actually put out their debut. But in the end, it doesn’t matter. They are out and if these 4 guys (who look pretty young if you ask me) can keep up with their style of music, I foresee a solid career for them. And there are several reasons why. But before that, let’s get the obvious out of the way. This is basically a demo tape, with a pretty raw production. But it is also a solid recording, with a surprisingly clear mix and a huge "what you see is what you get" attitude towards their music. With a proper studio production, this demo / album would be raising eyebrows everywhere. I mean, in the end, the music is what matters most and for me, FALLEN NATION has put out one of the best demo tapes of 2017 so far. Speed / Thrash Metal the way it was meant to be played. And an amazing HELLWITCH cover (I am a huge HELLWITCH fan, so props to them for picking such an amazing song)! I really can’t say much. The main influences here are obvious: MEKONG DELTA, VENDETTA, PARADOX, early HELLOWEEN, RAGE etc. But FALLEN NATION has a huge grip on how to play that kind of music today! It is so satisfying to listen to their demo, because all the songs have variation, groove, tasty leads and great riffs for days. But the most important aspect here is attitude. I mean, if somebody told me this was an unreleased recording of any of the aforementioned bands, I would fall right in! Alexandr’s vocals are great! The right mix of attitude, anger and melody. He also handles the bass properly, but he could stray away from just following the guitars. Just a tip there. Now, Dmitry and Egor’s work is awesome. They have come up with a bunch of memorable riffs and tasty leads. And Sergey’s drum work is a bit sloppy at times, but it fits the music perfectly! I am definitively looking forward to some more material from FALLEN NATION. Do yourself a favor, go show them some well deserved support and get this demo tape. For all you 80s freaks, you are in it for a treat. And for all other Metal fans, this should take you back to that "Golden Era" when there were no digital aids, no sterile sound and no overproduced piles of stinking shit. That era when Metal mattered the most! Band contact: www.facebook.com/fallennationmetal