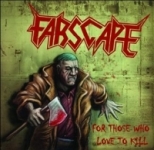 FARSCAPE
For Those Who Love To Kill
(No Colours Records)
46:48min

Almost overnight the retro Thrash scene sprang into public view all across the United States, Sweden and, apparently, Brazil. In truth this new scene has existed since 2000 and possibly a little earlier. FARSCAPE are proud members of the new scene, and like everyone else who has tried to resurrect the patch and Nike high tops, they don’t play anything you’ve not heard before. For some reason, every new Thrash band has the same dry, hopelessly computerized dry crunch. On the other hand, as this is only a compilation of demo and cover tracks (the "For Those Who Love To Kill" EP from 2007, the 3 songs from 2005’s split with VICTIMIZER, ETERNAL PAIN and BETRAYED, the "Doctrine Sickness" 2001 demo as well as a live section, that consists of 3 songs from August 2003, incl. covers by KREATOR and SACRIFICE – Frank), the harshest of judges ought to stay their hands until they hear a proper full length. Not surprsingly, FARSCAPE draw their influences from DESTRUCTION, EXODUS, FORBIDDEN, and virtually any and all other headlining Thrash acts from the 80s. We still live in post-Thrash apathy, but things are slowly getting better. www.farscape.kit.net