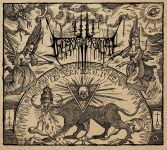 French Black Metal tends to be hit or miss. Even in the days of The Black Legions in the 90s, bands in that group such as MUTIILATION and VLAD TEPES were somewhat of a mess regardless of their influence. FERRITERIUM’s somewhere in the middle, though maybe on the ‘hit’ side more than the ‘miss’ side. Members Raido (vocals, guitar, bass) and Bael (bass), on their second full-length "Le Dernier Livre", deliver a fairly solid group of songs that don’t really move the genre forward, but don’t take a step back either. Maybe it’s the mix, but the high-pitched guitars in ‘Chapitre 1’ (none of the tracks have real names) seem a little weak. The blastbeats are steady, however, as the vocals are a growling, grumbling regurgitation. The second track, ‘Chapitre 2’, continues the fast-paced guitar and drums combo, and the vocals sound like a tortured soul shouting its threats from the bowels of Hell. Track 3 (‘Chapitre 3’) is a more straightforward rocker with more squealing guitars that have taken up quite a nice character of their own. The song shifts, sways, shudders and steamrolls in a constantly changing amalgamation of Black Metal anger. ‘Chapitre 4’ is a majestic explosion of bile that deteriorates every peon around it. FERRITERIUM seem to almost grow as a band as the album moves forward, indicating maybe the earlier songs could have been mixed into the middle of the album to give it a stronger start with another song. The fifth track, ‘Chapitre 5’, is possibly the most powerful, and shows the band at its finest. Halfway through, a kick-ass breakdown bashes in our lungs, taking our feeble breath away. The final track (‘Chapitre 6’) is another sledgehammer to the skull with its exploding energy the first minute before slowing down (as other tracks also do), then rising reborn in flames at an even more outstanding speed. "Le Dernier Livre" may not immediately catch your attention, but multiple listens may yet bring out a higher appreciation for the album. For more information, check out www.facebook.com/ferriterium, www.epictural.fr