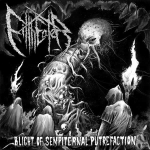 Well, I’m totally addicted to this album and you should be the same, especially if you’re into the sickest forms of Death Metal. "Blight Of Sempiternal Putrefaction" is the first full length CD from the American band FILTHEATER and it really shines in the Death Metal underground. Here we have nine songs for almost 38 minutes of musical sickness, released by the Spanish label Memento Mori. This album is the proof that even in the 2000s there are American bands able to play rotten Death Metal. "Blight Of Sempiternal Putrefaction" takes the best of various styles of Death Metal. It’s chaotic and grinding like NUCLEAR DEATH, it’s obscure like INCANTATION’s "Onward To Golgotha", it’s raw like ROTTREVORE, it’s filthy like early EMBALMER, it’s brutal like BRODEQUIN and ORCHIDECTOMY. It has everything you would expect from a brutal and truly underground Death Metal release. Non-stop drums with tons of furious blastbeat accelerations and a great natural sound, a frantic and macabre guitar, a dirty but effective production, an ultra-guttural, disturbing and cavernous vomit-like voice. This is sick music for sick people: top quality putrid Death Metal at its best! The visual and lyrical concept mix occult, horror and gore. FILTHEATER released one of the most brutal and disgusting albums I’ve been listening to over the last few years; for sure my favorite Death Metal album of 2019 so far. If you’re into brutal and extreme stuff, you ought to buy this album. It sounds like the flies buzzing over a rotting corpse and the maggot-crawling flesh. FILTHEATER won’t disappoint you. www.facebook.com/filtheaterband, www.memento-mori.es