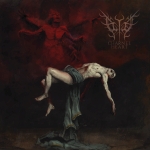 This album is the sole release by FLYKT, a Swedish Black Metal band, and it is quite impressive. It begins with a great, fast and aggressive Black / Death Metal song called ‘Compendium Of Sacrilege’ with fierce drumming that drives the musical onslaught (that bass drum is really pounding). The production is excellent and befitting this style of music. The following track though, ‘The Great Assassination’, has a different mood entirely. Blacker, slower and almost depressive at times, but also very well composed and performed. The drums shine once again, but the bass and guitars do an awesome job as well throughout the whole album. The vocalist is also very good, with a voice that reminds me of WATAIN at times. The following track is a true speed massacre, and since their songs tend to be long, there is time and occasion for variation… other tracks will balance between slowness and speed. FLYKT manage to do what they do very well, with a high technical level and the ability to pen fine tunes. The only difficulty I can see them having is to sufficiently distinguish their sound from their influences. Nothing here adds much to previous bands. Their strength is having written such a very good album. In these times I don’t find that to be enough… but what matters is that if you are a fan of DISSECTION, DARK FUNERAL, NECROPHOBIC and the likes, chances are you’ll really much enjoy "Charnel Heart". Discover this by going to www.facebook.com/flyktofficial, www.folter666.de