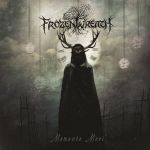 Coming from Hungary this is the debut album of some very old school Black Metal band with lots of atmosphere, keyboards, high pitched vocals and a definite ode to the 90s Black Metal that was created in Norway and Sweden in those days. The band has a sound of their own, especially in the way they mix in the quite good solos. Some parts do sound a bit folkish and the fact that they do their lyrics in their native tongue is giving them that older eastern European sound. Everything else is just a reverence to their influences i.e EMPEROR, BURZUM, BATHORY and you know the rest. The production values while everything sounds clear, has not much power, as the guitar is thin and sometimes the drums sound drowned. Back in the 90s that sound was because the lack of knowing how to record properly and the founders of the style later on proved they wanted actually to have a good and full sound, but nowadays it is used to try to evoke those years, and I am afraid that the impact is no more. Do not get me wrong, this is a very decent album, if you were a fan of those early Black Metal recordings. That sound, like done in the forest, you will like more than anything for the nostalgia factor. Newer generations of Metalheads that are into the style will also enjoy it for what it is, a quite decent album, but in the end many things have already been done and in a better way. I do find them to sound a lot better while doing slower or mid-tempo songs and where the melody they use shines more. In any case, this is their very first album, so there is always a chance for the band to come up with something better in the future. More info you will find at www.facebook.com/frozenwreath or www.facebook.com/filosofemrecords