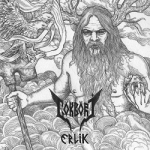 Basically a Turkish band settled in New York (perhaps soon to be re-located if Trump deports everyone… forgive my dark humour), GÖKBÖRI play a seemingly simple brand of straight forward mid-paced Metal, with some old school Black and Thrash looming about but a lot of Heavy and even Rock as well. Begun as a project by Emre Balık, GÖKBÖRI eventually evolved into a real band, and “Erlik” is the sophomore album, the title referring to the Turkic god of death and the underworld. I took the trouble to Google translate the lyrics that are mainly about mythology and folklore. And it’s a great album. As I said, it’s pretty straight to the point, no frills, no bullshit. Their strength lies in composition, and the songs have much to offer. The riffs aim at kicking your ass, and on top of it I don’t know anything obviously similar to their sound, and that is much to their credit. I keep thinking MOTÖRHEAD is a good comparison, but they do not really sound like them. I was also reminded of the early works of KAT and DRAGON, not only because of their kind of old school Metal but also, naturally, because I am a bit of a sucker for Metal with rough-sounding languages I cannot understand, and I do love the vocal work in GÖKBÖRI. The hoarse voice sounds much angry and aggressive, although sometimes more melodious mainly towards the end of the album. In fact, the first few songs are a bit stronger than the rest in my opinion (real Metal gems), and later the guys allow themselves to experiment a little more with their music, such as in ‘Gökten Gelen Tuğ’ or ‘Çift Başlı Kartal’. And ‘Yelbegenler Yüresi’ even includes a solo by Christopher Amott. Bottom line: this album is heavy like a ton of bricks and just as heavily recommended! For all further information check out: www.facebook.com/pages/gökböri/119304364824132, www.hammermuzik.com