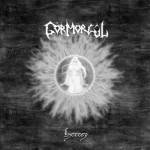 GÔR MÖRGÛL is the obscure moniker of this Italian quartet that comes from Villacridro, a small village in the south of Sardinia. Being active since 2007, they evidently gained much experience in their practice room to develop their songwriting and instrumental skills. After two EPs in 2010 and 2014 (entitled "In The Sign Of Blackness" and "Ruins On The Icons Of God"), their first full-length album ‘Heresy’ saw the light in 2015 thanks to the collaboration with Satanath Records for the European / Asian market and with Death Portal Studio for the American one. There are eight songs, without useless intro / outro or sample tracks, for a total length of just thirty minutes, a good choice to get violently to the point. GÔR MÖRGÛL play blackened Death Metal in a technical way, reminding of the transformed sound of BEHEMOTH from "Satanica" on. The production is really more professional than on their previous stuff, with all the instruments noticeble to the listener. It’s mainly the tremendous drumming of Simone Piras (ex – HOUR OF PENANCE) to bring the performance of his band on supersonic speed. He’s really as good and fast as drummers like Inferno, Faust or Hellhammer, in fact most of the songs take advantage of his incredible bomb blast beats. The first seconds of the opener song ‘Indoctrination’, prove that I’m not saying bullshit! However, Piras’ drumming is only one of the good elements here, the guitar work of Leonardo Lantini is also excellent, he can combine a lot a brutal riffs with a melodic sense but never too catchy. Moreover, he has also a good taste for armonies and solos. Nevertheless, the overpowering voice of Andrea Murgia and the solid bass of Marco Soggiu complete the task of producing a well compact wall of sound. Although I’m not a big fan of this kind of modern Death Metal, I can’t deny that GÔR MÖRGÛL are an admirable band and they surely deserve more attention from fans of BEHEMOTH, AZARATH, HATE, ANGELCORPSE and ARKHON INFAUSTUS, so find out what they’re doing at www.facebook.com/pages/gôr-mörgûl/83686970497 or keep an eye opened on their Russian label at www.satanath.com.