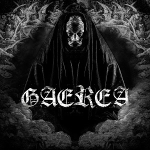 GAEREA is a Portugese Black Metal band that was formed in 2016. This equally named EP is their first release and features 5 tracks that reminds of what MGLA and ACRIMONIOUS presented recently. The songs lean strongly on atmosphere which is managed by long spun-out, almost dramatic riffing in combination with mainly low speed (and less dominating) drumming. The melodies aren’t bad, but not that spectacular either. The vocals are pretty unconventional for Black Metal and have a brutality you’ll rather find in NU Metal. Also the beginning of the fourth track ‘Through Time’ had a typical OBITUARY / SEPULTURA vibe. The continuation didn’t convince that much but the ending made up for it. It seems like the band tries to reach for a public outside the underground. The clean production also supports this impression. In some occasions, like in the opener ‘Sanctificato’ or in ‘Void Of Numbness’ with its hint to BEHEMOTH, it’s pretty impressive and the drumming is doing its best to generate as much power as possible. Having mixed feelings at first and despite the points mentioned, "Gaerea" had a positive impact in the end. Decide for yourself if they get away with it. For more info, check www.facebook.com/gaerea or www.everlastingspew.com