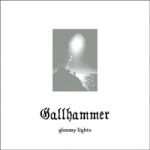 A nice package arrived here again. GALLHAMMER? Hm, the first names which flashed into my mind were Hellhammer and Warhammer. The fact that one band member wears a CELTIC FROST t-shirt seemed to confirm my suspicion. And indeed this all girl (!) outfit from Nakano / Japan is influenced by acts like HELLHAMMER (but just a slight influence not a 100% copy), some other apocalyptic sounds like AMEBIX and for sure depressive Black Metal. “Gloomy Lights” is the band’s first full length album after having released two demo CD-Rs (“Gallhammer” in 2003 and “Endless Nauseous Days” in 2004) and a two track rehearsal tape in 2003, simply called “First Rehearsal Tape”. The packaging of the CD is quite unspectacular and you would never expect such a vile brew behind that. The music’s pace is mostly in the slow / mid pace range and uptempo / faster parts are very rare or almost don’t exist. The vocals are raw, screamy / scratchy (reminding me to some depressive Black Metal bands) with some growls performed and shared by Vivian Slaughter and Mika Penetrator who are also responsible for the guitars and bass. Just to complete the line-up: Risa Reaper handles the drums. The album starts off with a very slow track called ‘Endless Nauseous Days’ with a gloomy atmosphere, directly from the crypt. The other 7 tracks (incl. one instrumental) are more or less slow / mid paced. Only ‘Lost Myself’ has a faster part and all the songs live from this very dark, depressive and gloomy mood. All is played in a minimalistic way but it spreads enough raw and evil energy.The production of the album is fair which supports the temper perfectly. This album is definitely nothing for people into brutal Death Metal or fast Black Metal stuff. But Metalheads who enjoy listening to acts like HELLHAMMER, AMEBIX, BURZUM and depressive blackish stuff in general can check them out. Also collectors who like to discover exotic bands should give GALLHAMMER a listen. Maybe you are able to find another little underground gem here. Sound files can be found at their web site www.geocities.jp/gallhammer and you can contact Vivian Slaughter for prices or merchandise directly at gallhammer@hotmail.com.