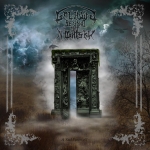 GALLOWS BEYOND THE NIGHTSKY
A Sad Farewell
(self-financed)
22:17min

GALLOWS BEYOND THE NIGHTSKY is a project of the ORDER TO RUIN members Denis and Mike, who shared some ideas, which did not fit into the concept of ORDER TO RUIN. The band calls their style Battle Metal so I was curious to hear, what exact direction they follow. Fundament of their sound in my opinion is melodic Death Metal, but with the use of keyboards and symphonic sounds and also female vocals, bands like NIGHTWISH, ETERNAL TEARS OF SORROW and TURISAS can be named as comparison. Especially Mike seems to be a lot into this genre, so it was the better option to leave their main project as it is and create something new with the different ideas. The containing five tracks are all on a high technical level with a lot of fine guitar and keyboard melodies. The changes between the male caws and female vocals are ok and never annoying. Normally I do not like female vocals very much but the guys managed to keep a fine balance there. The used keyboards create a melodic and symphonic atmosphere but are never overdosed, so all is in balance and does not sound wimpy. Songwriting wise the project is already on a high level and the fact, that all was recorded, mixed and mastered on their own, shows the professionality of the musicians. As known from ORDER TO RUIN once again the release comes up in a nice digipak for a reasonable price or the tracks can be downloaded for free via their facebook page. So if you like melodic symphonic Pagan / Folk Metal which is not over-produced, please check the band at following location: www.facebook.com/gallows-beyond-the-nightsky-716047868523749