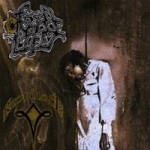 Besides the fact that 38 minutes are a bit short for a split CD I was also disappointed by one of the two bands featured on this CD, namely GERBE OF LIFE. Although the French Grinders are around for some time now I don’t get what should make them somehow special or extraordinary except for the fact that they mostly use French lyrics. The songs are all quite similar in terms of aggression and quality, the production is raw, the vocals rather lame and the whole thing bores me extremely after a while. REPUDIATE are much better in my opinion and I would have loved to hear more than just six songs of this talented band. Although they make use of slightly chaotic song structures, their varied and skilful guitar play convinces me along with the brutal vocals and reminds of high class US-acts like HATE ETERNAL, newer MORBID ANGEL or NILE (especially ‘Devoted To Betrayal’, cool song!). Unfortunately a rather boring song like ‘Hangman’s Smile’ weakens the good impression REPUDIATE’s first three songs left behind, but on ‘Spiritual Way’ they are good again. The production is bassy and offers enough transparency to make even the nice bass play recognisable, the vocals could be a bit louder in my eyes. While I’m writing this sentence the wonderful lead guitar once again sets in and performs one of these melodic solos, fuck I really love shit like that! REPUDIATE should work hard on a full-length release, because their part on this split CD shows that they are undoubtedly an interesting new band. There are certainly things that need to be improved, especially the vocals and the songwriting, but musically they have already made the first step on the right path. For more information, have a look at the Skull Fucked website: www.skullfucked.ht.st