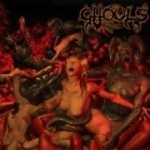 GHOULS
Until It Bleeds
(Despise The Sun Records)
35:04min

I can’t help but it always seems that the Italian Metal scene is quite neglected by the ordinary Metalheads. A fact you could observe in the past and which is still present even our South European neighbours puked out a couple of killer bands in the past onto the surface of the world wide underground. Despised by the masses, worshipped by a few and now considered as cult decades later. My point is, if you don’t check out always the entire scene, you might miss some excellent acts. One could be may be this four piece. So fans of brutal Death Metal should pay attention to GHOULS debut album "Until It Bleeds" even it was released a few years ago, in 2008 to be exactly. Hailing from the eternal city of Rome these guys can compete without any doubt with their rivals from the US or other European countries. The band offers a solid technical ability and especially the four string department executed by Stefano is worth to be mentioned. The insane bass guitar, which is on ferocious speed, profits from the good and ballanced production where you can hear all instruments quite well. The rest of the squad is technical skilled as well so the musical standard leaves nothing to be desired. But can musical competence create automatically great songs? The answer is yes and no at the same time. One side of the coin: the eight tracks on the album deliver a lethal dose of brutal Death Metal with some excellent crushing & crispy riffs and destructive blasting drums. The guttural vocals are brutal as hell but far away from the typical frognoise sound. The tunes have some nice spins and turns and offer a maximum of variation without losing the brutality. The other side of the coin: there is no real killer track on the album which stands out of the rest. Everything is rather on the same level and the album could lose its excitement after a while. A bit repeative. But nevertheless the positives aspects prevail. This is a solid slap of lethal Metal which should easily find some friends among extreme deathbangers on this rotten planet. And if you have a soft spot for sick, sadistic and sexual trenched lyrics as well – just perfect. An interesting band to keep an eye on with their upcoming releases. All interested people out there should get in touch with either the band at www.myspace.com/demonghouls or the label (www.despisethesunrecords.too.it). Tracks to check out: ‘Bitch Or Not To Bitch’, ‘Endless Pleasure’ or ‘Tears Of Pain’.