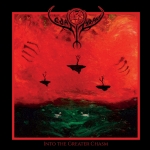 Not every day we have the chance to appreciate the materialization of 20 years of experience into a full album, uncommon but fascinating indeed. As I introduce the present debut of the Polish fiends of GOAT TYRANT, my first impression was all about a right prediction that the 41 minutes through 8 cuts confirmed, another occult jewel beneath layers of debris. “Into The Greater Chasm” came to coronate the Black / Deathrash Metal path that GOAT TYRANT has been cultivating for such long time, without detaching at all from their vision and sound, turning out to be incredibly honest on their instrument execution, production and feeling. There is no makeup, pretentions or tricks here but tons of passion and intention on every note, just as if you were on the same rehearsal room banging with booze at hand, some powder on the nose, a SAMAEL t-shirt and a crooked smile on the face. There is a couple of songs taken from their “Gate To The Necro” demo, that blends in the same line of the album which doesn’t break the coherence and context of it. Their particular sound and arrangements bestows a different approach on Metal that seems to be lost each day that passes, because they have developed a method of sounding evil and damned without overcharging the gain or filling the hall with unreal reverb, leading to put your attention on the basics: the riffing and personality. Even there is no charming or innovation, the primitive yet effective puking works on times where there’s an excess of information at the turn of the corner, so if you want to taste an atemporal work, here it is. On the other hand, what also caught my attention was the front cover which is mesmerizing and goes along with their logo change, turning out to be a clear move its integration on the artwork. There is nothing more interesting about artwork that makes you think about it instead of giving you all the answers before listening if you know what I mean… For the ones who haven’t heard of GOAT TYRANT yet, check their previous material as the split releases with CULTES DES GHOULES and DOOMBRINGER, as well as their other demo tapes and related bands as PUTRID EVIL or WITCHFUCK… or not, do what you want, but the ancient feeling still rules! www.facebook.com/fallentemple666