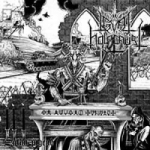 I smelled the worse just looking at the tasteless title of this album (bland provocation it is, in my opinion), fortunately the music enclosed in the plastic comes much better than what I could have envisioned in the first place. GOATHOLOCAUST promise old school Black Metal in the booklet, this is exactly what we get here. Yet the band prove they have imagination enough to refresh some old formulas. Welcomed injections of old Heavy and Thrash vibes add a lot to the cause of this record. It is obvious that this bunch of musicians thought hard to come up of interesting music. The vocals go from mild growls to screeches in the Petrozza / Schmier way. The song structures escape the trap of linearity or predictability rendering the final result a very interesting find among piles of crap “extreme” records you don’t want to have in your collection. Some songs are almost Doom pace-wise, the rhythms vary a lot throughout the album, and I guess the GOATHOLOCAUST musicians have a strong musical culture and don’t limit themselves to rehash modern-days Black Metal ideas. The band’s moniker doesn’t reflect the music, we don’t deal with primitive and raw sonic chaos in the way of let’s say early IMPALED NAZARENE or BLASPHEMY, but to a more sophisticated music hidden underneath the now mandatory Black Metal accessories. For once, here is a band really able to raise up sinister atmospheres by the force of their music. Ambitious and progressive raw Black Metal strongly recommended. www.goatholocaust.com.