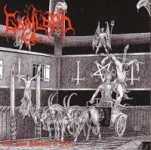 It seems that Nuclear War Now Productions wants to dust all the underground cult acts, so, after the demos from ROOT, DEATHYELL and some more almost unknown band, I’m sure old school freaks can remember this US black cult, which released its first and only album entitled “Reflections Of The Solstice” in 1991 (re-released by the way as “Goatlord” in 1992 in the US with a different mix), which had Mitch Harris (NAPALM DEATH, DEFECATION, RIGHTEOUS PIGS) as guest vocalist on some tracks. After that the band dissapeared, but a compilation of their old demos was released as a double CD / triple LP entitled “Distorted Birth: The Demos” in 2003, by From Beyond Productions. So, what’s this new stuff coming here from one the most old school oriented labels in the US or even the whole planet. “The Last Sodomy Of Mary” is a bunch of rehearsal songs which would have become the last album of GOATLORD if they hadn’t disbanded, which can be found as a CD or an LP, and the die-hard version of this last one has another LP with some extra tracks, including KISS and THE ANIMALS covers). But let’s talk about the music contained on this album. First of all, not all the tracks here are unreleased, as some appear on the demos of the band as well, which are ‘Unholy Black Slut’ and ‘Sacrifice’. About the songs, we can say that they follow the style they were playing on their previous releases, pure unholy Doom / Black Metal with midpaced tempos and raw athmospheres and growling vocals, like a mix of old thrashing Black Metal bands influenced by SLAYER on one side and Sludge / Doom pioneers on the other one, which by the way is simply great, not typical at all, especially when they were doing it, and sounds powerful like hell. But I have to say this recording is more for the true fans of the band, as the sound quality is quite harsh (you know how a rehearsal sounds like) and it can be quite hard to listen to for somebody who doesn’t know the band before (so I recommend buying the re-release of “Reflections Of The Solstice”, by NWN Prod too, for this kind of people). And for the ones who already liked “Distorted Birth…”, get it, you know what to find here and it’s quite cool to listen to some new tracks of this cult act, even more with the absolutely great cover done by Chris Moyen, which fits perfectly with the mood of the band, and if you like vinyll, get that damn die-hard edition, as it contains (apart from the two LP’s), a sticker, a patch and a poster. www.nwnprod.com