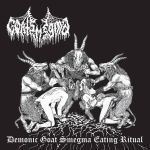 “Demonic Goat Smegma Eating Ritual” is the first effort from the Tallinn based War Metal band GOATSMEGMA. It was originally released on tape format by the Estonian label Trash Can Dance in 2018 (limited to 48 copies). Here we have the CD reissue (limited to 500 copies) released in December 2019 by the Polish label Morbid Chapel Records. This is more an EP than a full length album: eight songs for almost 20 minutes. Musically, conceptually and visually GOATSMEGMA is a prime example of War Metal or Bestial Death Metal, call it whatever you want, but it’s basically raw Black / Death Metal in the vein of BLASPHEMY. There are all the ingredients of this savage genre, that has in recent years seen a resurgence. So, in summary: a black and white blasphemous cover artwork with some demonic goats raping a nun, satanic-porno lyrics, gas masks, balaclavas, bullet belts, inverted crosses, chains, spikes, tons of curses, an ultra lo-fi sound production, a guitarist whose name is Sabbatical Invoker Ov Primordial Wilderness etc. Ok, you got the point: nothing new under the black sun. By the way this is what the fans of this style want: razor-like noisy guitars, raw drumming and echoed raucous vocals. Yes, “Demonic Goat Smegma Eating Ritual” is a chaotic, morbid, primitive and sick release. Unfortunately, as often happens with these kind of bands, the aesthetic prevails over the music, but I assume it’s a marginal aspect, if you’re a fan of Bestial War Black Death Metal. In conclusion, this is a recommended EP to all who are into BLASPHEMY, ARCHGOAT, GOATPENIS, GOATVOMIT, MORBOSIDAD, PROCLAMATION, ANAL BLASPHEMY, BESTIAL WARLUST, CONQUEROR, CREMATION… too many to mention. www.facebook.com/goatsmegma, www.morbidchapelrecords.com, https://morbidchapelrecords.bandcamp.com