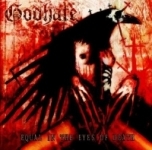 GODHATE are a brutal 4 piece Death Metal band from Sweden and they really deliver the goods on their latest album, “Equal In The Eyes Of Death”, the bands 7th release (if you take their demo’s into account). At times reminding me of KREATOR, CHIMAIRA and DECAPITATED, GODHATE unleash waves of unrelenting modern Death Metal anthems at the listener, while still finding room for some haunting, melodic guitar lines along the way. This is most evident on the track ‘In Praise Of Sin’, which really reminded me of ‘The Lord’s Sedition’ by DEICIDE (found on “The Stench Of Redemption”). Speaking of a DEICIDE influence, the overall guitar tone and solo style of GODHATE guitarists Tony Freed and Chris Johansson is very close to that of legendary Death Metal guitarist Ralph Santolla. Another standout track is the subtly named ‘Fuck Off Jehovah’, which brutally bludgeons the listener after the eerie, haunting monk chanting opens the album. The overall musicianship on the album is of the highest quality, which is almost a necissity for any modern Death Metal band given the level of musicianship on display amongst many of their peers. The drumming is chaotic, with some very nice blasting and double bass catching the listens ear (and punishing it!) throughout (listen to ‘Alla Xul Kanpa’). The vocals are more deep, angry shouting than guttural (which I personally prefer) and fit the music well. At times the demon sounding backing vocals (a favorite of Mr. Glen Benton) are deployed to goo effect. Something that I still find very important to albums is the packaging and cover art and GODHATE have done a great job in this department. The cover image of a raven / woman creature is striking and the dirty, muddy almost red / black color scheme, which to me looks like stale blood, really makes the cover stand out from the crowd. While the album deserves to be heard by any fans of new or old Death Metal as it really is a quality release, my only complaint is that the album brings nothing new to the genre. Some attempts at new ideas would have been nice but this is a minor complaint really as GODHATE have really come up with a crushing, yet at times groove oriented (see track ‘Dark Funeral’) release that is sure to satisfy death metallers the world round. Highly recommended. www.godhate.com, www.myspace.com/godhate