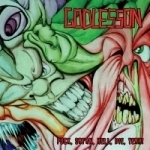 So, Finland’s GODLESSON wants to shoot down the legendary CA-Thrashers SLAYER from their gigantic-sized Thrash-throne, by releasing their own 10-track “Reign In Blood”. Sounds too good to be true, doesn’t it? Well, don’t hold your breath any more by sheer excitement because that’s really not the case with this 4-piece Finnish Thrash Metal act’s debut album, titled somehow fancifully “Fuck, Satan, Hell, Die, Yeah!.” SLAYER has – without one single doubt, worked as the biggest inspiration for these Finns, and in fact, spinning through the ten tracks that are on offer on this release, indeed puts a wide enough smile on your face – wanted it or not. The guys truly have some sort of SLAYER – syndrome on; there’s naturally the riffs that are kind of well ripped from the Hanneman / King school, vocalist Kimmo trying to imitate Mr. Araya the best he could and drummer Jani keeping things straight and a little bit simpler the same way as Mr. Lombardo than most of today’s over-technical virtuosos behind their drum kits. Sure thing, GODLESSON have probably had some serious purpose to sound like SLAYER a little bit here and there, but I suppose they have also added some of their own tongue-in-cheek mentality into this wholeness – at least if their song titles are anything to go by (‘Lavatory Suicide’, ‘Broken Lamb’, ‘Die Bitch Die’, etc., I guess you get the picture, right?).  “Fuck, Satan, Hell, Die, Yeah!” has its moments – and if you are a SLAYER fan, I bet you’ll find a plenty of fun out of this release as well, especially for some beer-smelling, booze-filled headbanging parties. A song like ‘Dead In The Abyss’ sounds really like GODLESSON have tried their absolutely very best to copycat SLAYER’s ‘Dead Skin Mask’ off the “Seasons In The Abyss” album, which one may have even guessed just by looking at the song title alone.  They have also got a few fast-paced, nice little Hardcore-tinged Thrashers for this record – just like such songs as the title track of the album ‘Fuck, Satan, Hell, Die, Yeah!’, ‘Lavatory Suicide’, ‘Godlesson’ and ‘Barely Legal’ all prove it so loud and clear. In conclusion it’s relatively easy to say GODLESSON consists of four die-hard SLAYER fanboys, who have wanted to have some fun in the name of SLAYER. If that’s something we should punish them for, consider it our fault then only for not understanding these guys’ serious obsession with early SLAYER stuff. Nothing changes that fact GODLESSON is the best SLAYER cover / tribute band I have heard thus far – and that’s quite an achievement in itself, I think. www.myspace.com/thegodlesson, www.godlesson.com