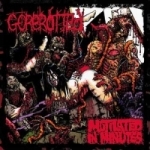 Before I come to the actual music let me tell you that I just don’t get it why people (or bands in particular) enjoy stupid cover art like this. It’s even more confusing when you find out that the "artist" that GOREROTTED have used for their sleeve, usually works as a comic book "artist" for Filth Comics… This is simply bad "art" (not to mention the even more dumb scenario they got, of an extremely bloody and gory fuck from behind) and I could easily draw a similar cover within a short period of time. But anyway, luckily GOREROTTED’s music is more convincing. It’s actually quite good, which once again proves that you shouldn’t necessarily judge a book by its cover. The band hails from the UK and already released a pretty successful demo in 1998 (nicely entitled "Her Gash I Did Slash"), which not only resulted in a lot of exposure, but also in a deal with Dead Again Records. Their debut full length "Mutilated In Minutes" features nine often very catchy, yet extremely grinding Death Metal tunes. Musically they should easily appeal to all those of you who would enjoy the riffing of CANNIBAL CORPSE in combination with several older elements of CARCASS and a less weird version of MASS PSYCHOSIS (R.I.P.). The band has two vocalists in their line-up and as you probably already guessed – one is deeply grunting and the other one responsible for the more aggressive screaming. The album has a good production and the band seems to consist of very talented musicians, which isn’t always the case, especially not in the Grindcore genre. The reason for the aforementioned catchiness is the songtitles, which often get repeated a few times, so that the crowd can still sing along during the intense blasting insanity. So, to sum it up: stupid packaging, but quite enjoyable music. If you should be having trouble in finding a copy, it also sells for $15 / 25,-DM / 10 pounds (ppd.) directly from the label. Contact: Dead Again Records, P.O. Box 18516, London E11 3UJ, UK, e-mail: promo@deadagain.fsnet.co.uk, website: www.deadagain.fsnet.co.uk