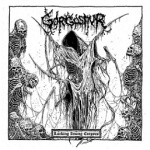 After a quite interesting demo released back in 2014, GORGOSAUR returned from the grave to doom the earth with "Lurking Among Corpses" in 2016. The duo decided to re-record all three tracks of said demo with slightly different arrangements and keep the album rather short with its total of 30 minutes playing-time. Something I really appreciate since there’s nothing more annoying than an excess in length when it comes to extreme Metal records. GORGOSAUR kick the record off with some creepy piano intro which works perfect in my opinion. Could easily be a lost gem of some obscure Italian horror soundtrack. The following three tracks are unreleased compositions which totally go hand in hand with the demo material. Nice Swedish Death Metal mixed with some Punk vibes here and there. Something I really like is that both members share the vocal duties which makes the tracks very dynamic since GORGOSAUR consist of a dude on drums and a girl handling the axe. With the first re-recorded track ‘Pyromaniac Narrations’ it gets really clear how much better this interaction between both vocalists work compared to the demo. The female vocals sound a lot more fierce and poisonous than on the demo which is great in my book. After that a driving title track, two demo tracks as well as the yet unheard ‘Burial Of Rats’, a continuation of total ENTOMBED and GRAVE worshipping, leads into yet another piano piece with the great title ‘Death Is Psychosomatic’. All in all one definitely can say that this is a really good debut album by a very promising band which doesn’t follow any of today’s trends (decorated with some excellent artwork courtesy of Mark Riddick again – Frank). If you are into dead bodies and putrid stench go check out these links: www.facebook.com/gorgosaur, https://gorgosaur.bandcamp.com, www.memento-mori.es