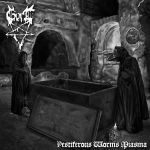 GORT from Naples in Italy are active in the Black Metal underground since 2002 already and have released several demos and split releases and a full-length album in 2008 so far. After the release of the first album, the band started to work on the material for the second album “Pestiferous Worms Miasma” and these tracks, which were finished already in 2011, are now finally getting released via Lupus Niger. The long waiting time until the final release of the material was worth the wait as the band presents themselves really matured and strong. The horde is one of the most serious projects around worshipping the traditional old Black Metal in the vein of DARKTHRONE or other traditional Norwegian bands. Their Black Metal is raw and uncompromising and heavily spreads 90s feelings. A time, when I discovered traditional Black Metal for me and the scene started by a few young people grew stronger and stronger. The eight tracks are some of the strongest Black Metal tracks I listened to for a while and only MGLA caught my attention that much in the last few years. Sharp and grim riffing combined with precise and tight drumming and hellish morbid screams take the listener on a dark and menacing trip. They vary their sound with some slower parts and these partly even go into the Doom / Death direction and this fits well into their otherwise raw sound. Even though their style is raw, it gets enriched by some nice but cold melody lines. The band also chose a proper production for their material instead of the garage style most old school orientated projects prefer. This helps to locate all the fine details in their tracks while giving this album some more spins as I am getting older and older and prefer proper productions instead of rehearsal styled recordings. The songwriting is really varied and the band also tries not to keep it only blasting. Even the caws are enriched by some clear choral voices here and there. All in all the band understands to deliver their own interpretation of the 90s Black Metal and are able, to write proper varying material, which always stays raw and hateful but they managed to avoid boredom due to monotonous songwriting. Fans of traditional Black Metal should grant this output some attention as this is a small and unobtrusively highlight in this still young year. More details can be found via www.facebook.com/pages/gort/108614055831638 or http://lupusnigerprodanddistro.bigcartel.com