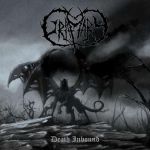 Now here’s something a bit more interesting yet diverse sounding for a change. GRAMARY, this Finnish symphonic Black Metal outfit has existed for 17 years already actually, since 1997 – and the band’s debut album, "Suffocation", came out on the small Russian label Helvete.Ru in 2008. 5 years have passed by since that record, and their follow-up "Death Inbound", pours more black blood into this bottomless cauldron where GRAMARY sucks its life’s blood for keeping its black heart pumping in the name of final Armageddon. "Death Inbound" actually heavily reminds me of the times of Norwegian EMPEROR’s "In The Nightside Eclipse" record, with a twist of something off DARK FUNERAL’s album repertoire. GRAMARY’s music has basically been built up from the same elements that one can find from EMPEROR’s "In The Nightside…" album and some DARK FUNERAL releases but "Death Inbound" never quite reaches the same hysteric and diabolic level as wholeness that is involved on the "In The Nightside…" record, or has the same finesse in the black arts that DARK FUNERAL used to have on some of their earlier releases some 15-20 years ago. Vocalist Deil is the one that creates a pretty huge contrast to their music actually. His very unusual sounding vocal delivery, which sounds like a dry screeching is that element that really pops up out of their stuff, accompanied with some occasional death growls and clean vocals here and there. Undoubtedly some listeners may need some time to get their ears fully adjusted to his sick and deranged vocals. It’s no denying "Death Inbound" has lots of good ideas squeezed into it, and that’s something the Black Metal community can obviously appreciate quite much, I believe. So, try this… you may even find "Death Inbound" a pretty surprising album for yourself. Some more information about GRAMARY can be dug up from www.gramary.net