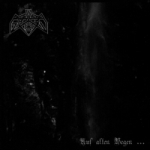 GRAUPEL started out as a project in 1995, originally formed by NAGELFAR’s Rykthius (drums) and Sveinn (bass) who joined forces at the time with DESECRATION’s vocalist / guitarist Zingultus in order to play "100% pure, early 90s Black Metal"… But due to lack of common rehearsal time the whole idea basically fell apart until Zingultus decided to fully dedicate himself on GRAUPEL again in 1997 with the two newly recruited members Ratatyske (on drums) and Gnarl (on guitar and bass). A debut demo (the six track effort "Als der Nebel…") was released in 2001 to be followed by a two track 7" EP ("Weiß wie Schnee…") in 2004 (featuring material that originally got recorded for a promo tape back in 1999 already). Despite the rather poor sound quality, those recordings nevertheless caught the attention of the newly founded Cold Dimensions label already, who offered the band the possibility of the release of a full length album… And that album has finally become reality now! "Auf alten Wegen…" is a highly impressive and very grim ten track Black Metal outburst of the most uncompromising kind. The sound is still extremely raw, but totally fits the icecold atmosphere of the material and easily recalls the classic DARKTHRONE atmosphere, with massive reverb on the vocals and a blacker than black overall musical attitude. None of the demo / EP songs made it onto the album, which means you’re about to experience all fresh creations here and they offer a lot of variety in the writing. Even though this is a very intense record all in all, GRAUPEL luckily still don’t blast the whole way through it yet create enough energy nevertheless. The lyrics are all written completely in German and the extremely dark, yet very fitting packaging of the record totally reflects the true-to-the-bone Black Metal feel of the whole release. In other words: truly a must have debut for all Black Metal purists who still care for bands with the right feel for this kind of music after many years of its commercialization! Website: www.wod-van.de/UNTER/Graupel/graupel.htm. Label contact and ordering information: www.cold-dimensions.de. For the vinyl version contact www.deviant-records.de.vu