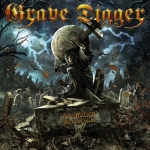 Maybe some people out there never listened to anything else but Death or Black Metal, maybe some people live in a cave or tree house. But I guess most readers listened to Heavy Metal before they discovered the darkside of music. Especially the older ones, because in the late 1970s / early 1980s there were simply no Death Metal bands. And despite the term Black Metal was already used by HOLY MOSES in 1980 (the “Black Metal Masters” demo) and satanic imagery was an established ingredient of Heavy Metal it was the self-titled debut by BATHORY in the year 1984 which started the whole Black Metal affair musically. Not to forget HELLHAMMER / CELTIC FROST. But back to 2015. Celebrating their 35th anniversary, GRAVE DIGGER entered the studio to re-record some of the finest tunes ever unleashed upon the Metal universe. 13 songs from the first three albums plus one track from the fourth album, when the band’s name was changed to DIGGER due to commercial reasons. Having in mind that the band was founded in 1980 and released their first demo in 1982 it is no exaggeration to submit that GRAVE DIGGER are one of the founding members of Germany’s Heavy respectively Power Metal scene. And the songs on this album are still, after all those years, pure joy and pleasure for every Metal fan. Fast and melodic guitar riffs, simple but effective songwriting, the typical sing-along chorus (mostly the song title) plus the remarkable voices of Chris Boltendahl. Speaking in terms of genuine Power Metal, it will not get better than this! The album features two songs from the upcoming full-length and they are on the same level like the songs written 35 years ago. Seems like the old guys still have the inspiration and stamina of a ‘Headbangin Man’. More info at: www.grave-digger-clan.com, www.facebook.com/gravediggerofficial, www.napalmrecords.com