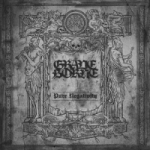 Some days you gotta embrace darkness, let it into your already darkened soul, let it be the soundtrack of a flight of thoughts, a journey through the murky parts of the mind and soul, grimness breeds grimness. Some music is better than other for such kind of days, though Black Metal is taking the price for being my favored musical companion for such times. Mostly old and proved albums that have been withstanding time and dust, though once in a while a new band or a new release materializes itself for being a worthy contender to the already approved mood-setters. GRAVEBORNE is such a band, hailing from Finland and now ready with their first full length release of pure grimness and atmospherically evil. The first thing that grips me, after the deep thundering darkness, that the music lays upon the altar, is the vocals. Cold and harsh, intense and full of emotion, sheer hatred and evil, vocals that give me chills aren’t something that I often come across anymore, though Ratoo, the monster behind the microphone in GRAVEBORNE, has accomplished to make it run cold down my spine. Musically we are getting a tour de force of classic Scandinavian Black Metal mixed with some pure Finnish darkness, that sound and atmosphere that the Fins, only, can invoke. Pacewise the music is a good blend of fast and blasting Metal and darker and midpaced trampling, in between that, we are getting good riffing, nice and chilling melodies, effective and varied drum work and a thunderous bass. On top of that, the production of the album is nice dark and organic, leaving room for the instruments when needed, sometimes the bass shines through, at other times the guitarlead tops and when needed the drums blasts through and whips the music ahead, nice work. "Pure Negativity" is a joy, even though that might be an oxymoron, to listen to and embrace. The atmosphere is gripping and the emotions that are being put into the music catches on and invokes chills and ave. This album has been a perfect companion to a dark day in solitude, and will be brought out in the light again, it seems like a lasting release, even though it doesn’t bring much to the table, besides well-composed and played Black Metal with intensity and emotions, something a lot newer works lack, evil has no boundaries, as long as albums, with qualities as "Pure Negativity", are being made. Now I just need to hunt down their demo "Astride Over The Grave" to hear where it all began. Get into the grave at: www.graveborne.com, www.myspace.com/graveborne and www.nykta.gr