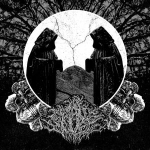 First off… let me just say GRAVECOVEN’s logo is beautiful. I couldn’t even begin to find all the letters. And for some reason, I find that enticing. Secondly, Phillip Gallagher and James Rauh (both from SWAMP WITCH) have released an EP of blackened Death / Doom entitled "Coughing Blood", a compilation of two demos unsurprisingly called "Coughing Blood" and "Coughing Blood II". So the California band apparently said to themselves, "Fuck it. We’ll just call it "Coughing Blood". And you know what? That actually makes perfect sense. And both demos deliver a filthy, decaying, murky amalgamation of everything I love about the genre. ‘Summoning Vengeance’ kicks it off, a track full of crunching guitars, pounding drumming and gravelly vocals that absolutely fucking rip your balls off. ‘Furious Fires’, before the maddening vocals jump in, includes high-pitched wailing, which show up throughout the EP from time to time. Otherwise, the song is a fast-paced bludgeoning of the senses. The third track ‘Spiritual Violence’ is almost an old school salute to early Death Metal until the blastbeasts join in. The siren-like guitars in the middle of the track blur the edges before careening back into the adrenalin-fueled chaos. The final track ‘The Ecstasy Of Hatred’ kicks ass throughout. The vocals never stray from their torment and angst, while the guitars radiate an insane aura surrounding the pulsating drums. Both demos contain very cohesive tracks to each other. Here’s a band that understands how to maintain their consistent sound which stretching the boundaries a little. Next in line is hopefully a full-length of all new Metal brutality as good as "Coughing Blood". No pressure, guys. For more information, check out www.facebook.com/gravecoven, www.godzovwar.com