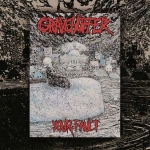 GRAVEHUFFER from Missouri in the Unites States are already active under this moniker since 2010 and are just releasing their second full-length album entitled "Your Fault“. The presented eleven tracks consist of a nasty mixture of styles like Grindcore, Death Metal enriched by a good doze of Hardcore, D-Beat and even Punk with a hell of energy in the tracks. You can hear that the guys do not care about stuff like structures or what could sound well and simply play what they want. After suffering of a tornado in their hometown the band seemed to have suffered of this as well as their sound has changed and especially the use of samples has been reduced in favour of a more old school sounding crusty direction. The production and instrumentation is kept very raw and simple with raw asocial grunts, shredding guitars and fine blast-beats. The tracks are typical Grindcore stuff and kept very short apart from the opening track and the last one. The lyrical contents cover a wide range of topics and the whole release spreads a partyesque live atmosphere and is a diverting nice album. The cover artwork rounds of this quite nice but rough album with a rough artwork reminding me of mighty S.O.D. Not an indispensable release but surely worth to check for Grind lunatics. More info here: www.facebook.com/gravehuffer, impairedreality@yahoo.com