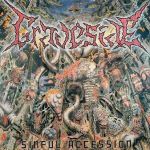 The world of Metal is full of hidden gems and forgotten jewels, released by bands that were at the wrong place in the wrong time. And sometimes there’s someone who detects one of these forgotten bands and gives their music a second chance. Well, meanwhile this happens very often, to be honest. In this case, the gem digger is the Russian company GS Productions and the diamond brought back to light is the only album of their country mates GRAVESIDE. This band was from Tula in the western part of Russia and started in 1990 under the moniker Хирургия (Russian for “Surgery”) and changed their name to GRAVESIDE a year later. In 1993 the band already broke up, just after the release of their only full length album “Sinful Accession”. Originally released on vinyl only, it is now available for the first time on CD. The reasons why GRAVESIDE weren’t widely known until now are varied. Of course Metal from Russia was still concerned “(too) exotic”, in a negative meaning, in the early 1990s. Additionally, the original label Moroz Records was really new back then and their releases were hard to get outside Russia. With the blessings of the internet, an album like “Sinful Accession” would have blown up some dust around the world for sure. GRAVESIDE were not really a revolution, you can hear that the Russian four piece learned their lessons from the likes of MORBID ANGEL, DEICIDE or OBITUARY. But combining these major influences and still not sounding like a copy is a skill that is still worth a lot. And straight forward, smashing Death Metal songs like ‘Voices Of Devastation’, ‘Magnificient Blasphemy’ or ‘Confession’ had the potential to be genre classics today, if only… Well, you know! And these songs are not the only ones worth being mentioned on “Sinful Accession”. For example, GRAVESIDE added odd keyboards effects in the vein of NOCTURNUS to their sound, listen to ‘Prayersick’ for proof. Or the pianos in the intro piece and the first breaks in ‘Pray, Pray To Your Asshole Mortals’ are unique as well. Only the final ‘We All Will Be Dead!!!’ comes along a little strange, since it fades out after just two minutes before it really starts. Well, this little flaw will be pardoned, for the whole other stuff on “Sinful Accession” is still a delight. The re-release version has an additional bonus track as well. ‘Darkness Light’ was originally released on the compilation “Metal From Russia” in 1992 and even though it sounds rougher than the album, it still is a very fine tune with a big hint on NOCTURNUS again. So, this is one more good reason to get the re-release of “Sinful Accession”. If you want to own the physical CD, be quick, since this digipak is limited to 100 copies only. Visit www.gsp-music.com to find out more and order your copy.