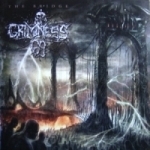 This Italian quartet was founded in 2001 under the name GRIMNESS, which was risen from the ashes of Hardcore / Grindcore band VALLIUM. The addition of 69 in 2005 marked a musical change from chaotic Grindcore to Death Metal / Grindcore. "The Bridge" is already their third album after "Grimness Avenue 69" from 2005 and "Illheaven Hells" from 2008. "The Brigde" is released on three different labels, namely Rising Nemesis, Sevared Records and Butchered Records, what may be… uncommon. The cover artwork is awesome and created by Par Olofsson (also IMMORTAL, EXODUS, THE FACELESS). Other artwortk is done by Seth Siro Anthon. Two artists for one record, what may be… uncommon. Not less than Par, but a different style. I’m not too familiar with their former releases, but as far as I know, they got some good critics and the band seems to be pretty popular. They already shared stages with DISGORGE (Mex), INHUME, AVULSED and PUNGENT STENCH. Not so strange, because the songwriting here is pretty complex and mature and offers enough variation within each track. The handling is also convincing, especially drummer Jacopo De Simone plays a strong role in this. Well, this is brutal, but luckily not too much! So this gives room for these guys to show they can write songs instead of making you press the eject-button for all the gurgling numbness. "The Bridge" will probably gain the band even more good response, ’cause the quality is there. Although it might take a few spins to saturate. So to wrap it up, people who are attracted to KATAKLYSM, SINISTER, MONSTROSITY and on the other hand ARSIS, A LOATHING REQUIEM, PANZERCHRIST and PSYCROPTIC should check this out. Not that it’s equally great or brutal, but they all sum up the things to come on this disc. Weird thing are the 8 tracks ‘V’ to ‘XXIX’ which are actually two minutes of silence before the closing track ‘Doomsday Carillion’, what may be… uncommon. To find the answer on why they did this, contact guitarist Fausto Cancian on dr.faustus@hotmail.it. Or use the following links for more info: www.risingnemesisrecords.de, www.sevared.com, www.butcheredrecords.com and www.myspace.com/grimness69.