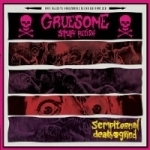 The 3rd album’s title by Spanish threesome GRUESOME STUFF RELISH sums their music and attitude pretty damn well! It is so self-explanatory, just like DISMEMBER’s "Death Metal". You instantly know what you get and in this case you can definitely judge the book by its cover as they say. Now for those in the dark, let me say that GRUESOME STUFF RELISH are one part of unholy Spanish trinity of Death / Grind, other two being MACHETAZO and HAEMORRHAGE. All of them are carrying this rotten torch and leaving the dead bodies in their trail. But let’s concentrate on the album at hand – "Sempiternal Death Grind"! Now that’s a statement which needs to be backed up with music and I can assure you – after spending a few days immersed in this slimy creation – this is as solid as it gets! GRUESOME STUFF RELISH deliver 12 tracks of smoking Death Grind (yeah really!) that is best described as a perfect mix between thick sounding, Sunlight style, heavily overdriven Death Metal à la DISMEMBER / old ENTOMBED / CARNAGE, intense Goregrind of CARCASS and insanely sick IMPETIGO, especially in vocal delivery. One could say that the formula has been done countless times by now, but here it is done with such conviction and necrophiliac love, that one just gets sucked into this killer bloodfeast! Totaly influenced by horror movies GRUESOME STUFF RELISH deliver one chilling groovy hit after another and the songtitles describe it all – ‘A Date With Fulci’, ‘Deadilicious Feast’, ‘They Follow Your Scent’, ‘Became A Zombie’, ‘Sex, Drugs & Grind’, ‘In Death We Breath’ (I wonder what band they’re reffering here to, hehe) and so on. The vocals are very distinct, sort of high-pitched growls, it’s like the guy is vomiting when singing – scabby goremonster personified! The riffs are catchy as clap, could’ve been patented in Sweden circa 1990, but done with a twist here and those up-tempo to mid-paced rhythms, sometimes sliding into humpa style, will have maniacs doing crazy dancing when performed live. You also get some fast Grindcore outbursts in tracks like ‘Desecrated’ and ‘They Are The Plague’, so the variation is here and keeps you fuckin’ wide awake, banging your head and punching the walls! The mix is perfectly balanced, every instrument wants to get from the speakers and eat you alive, aaaarrghh… so watch out, you’ve been warned! The sparse but well placed samples add another layer to ominous atmosphere of the album and makes the songs stand out even more. As far as I’m concerned, this is my top album of January 2013 and so you should really pay attention to my opinion and get it… NOW! www.facebook.com/gruesomestuffrelish, www.fda-records.com