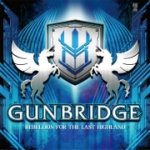 I still remember some of the outfit’s older works which I used to have in my collection back in the days when those items were released which seems to be ages ago (around 1998 – 2000 I think). GUNBRIDGE played excellent speedy Power Metal but unfortunately I didn’t continue to follow their career. Not having heard anything from them since then I assumed the band had already split up in the meantime. Therefore I was very surprised to have their new album in my mailbox. I guess most of you aren’t that familiar with this Japanese Power Metal brigade so I will give you some brief info who is behind this now five piece. The band started out as solo project of Masahiro Yamaguchi (aka Yama-B) who used to be the lead vocalist of the very well known Power Metal act GALNERYUS. After his departure from that squad in 2008 he started to revive his old project and gathered around some other competent musicians and as a result GUNBRIDGE has been active as trio since 2012 to defend the true spirit of Heavy Metal. This year (2014) two new members were added to the line-up to upgrade the formation into a full force, five piece commando. Musicwise Yama-B and his warriors continue were they stopped with their old stuff. So expect not less than excellent Power Metal with incredible musicianship, first class songwriting and a lot of variety within the stylistic frame to make "Rebellion For The Last Highland" a very enjoyable and headbang compatible album. Most of the ten tunes (incl. an intro and an acoustic bonus track) are played with a lot of speed (‘Rebellion’, ‘The Last Highland’, ‘Gunner – The Last Blast’) spiced with magnificent melody lines and furious leads, while the basic consists of heavy, crispy riffing. The obligatory ballad (here in form of ‘Go Forward’) isn’t missed here as well and the same goes for a real Heavy Metal anthem like ‘Vital Grain’. The band pulls out all the stops and doesn’t leave anything to chance. All songs are carefully arranged, jam-packed with subtle details. And not to forget to mention the surperb lead vocals of the master himself. The production is top notch and leaves nothing to be desired. Clear, transparent and powerful. GUNBRIDGE unleashed a first class album which should appeal to Japanese Metal enthusiasts and Metalheads into quality Power Metal in general. So feel free to get in touch with the band at www.gunbridge.net for more info.