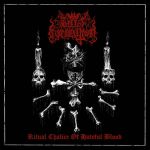 HELL’S CORONATION are hailing from Gdansk in the north of Poland. The duo has alrealy released some EPs and finally are ready to unleash their unholy first full-length via Godz Ov War Productions. Starting with the disturbing intro ‘Levitating In Tarry Fog’ they already spread an unholy atmosphere making me expect an infernal Black Metal thunderstorm. But ‘Covenant Of Doom’ is all but not that. The track is a slow presented bastard between Black and Doom Metal but definitely darker than maybe old KATATONIA. A very slow and grim soundtrack close to Funeral Doom fucked by Suicidal Black Metal. Very dark and menacing stuff but I somehow miss a bit the unique note bands like old KATATONIA or FORGOTTEN TOMB gave the genre with their old unique releases. But what I really like are the choral chants in the back and the variations in the vocals. ‘Mighty Black Flame’ continues the taken direction but is definitely better and with a far thicker atmosphere. And here the grim vocals of vocalist Zepar are really fitting well. Also the variations in the tempo are pretty well effected and the keyboards also enrich the atmosphere. This track really is pretty good and can be dealed as a black version of old KATATONIA as the drums have a similar enchanting simplicity. ‘Fullmoon Is The Sinister Light Of Providence’ is another increase as this is a really doomy track and somehow shows that the album grows from track to track. ‘I Crush The Sanctity Of Christ’ is a bit more Black Metal painted again and another reminder of the old FORGOTTEN TOMB stuff before ‘Ressurection Through Condemnation’ closes the album with its sinister atmosphere and damn dark screams in the beginning. A good last track and good summary of the whole album. All in all a good first album, even though I think a more melodic approach like old KATATONIA delivered on the first two releases would fit them even better. But definitely there is space to grow in their universe. So check them out via one of the following sources: www.facebook.com/hellscoronation, www.godzovwar.com