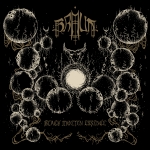 Question: more than 2 million tourists and just 350.000 inhabitants, which country is meant? Iceland – place of longing for many people. And not only for the average holidaymaker but also for musicians inspired by nature. Traceable, since the nature of Iceland is impressive and striking. So imposing that HRAUN from Germany picked the Icelandic word for lava as band name. The album title also hints to lava, because what is lava else than black molten essence? Anyone now expecting some kind of Viking Metal is sent down the wrong track. Instead HRAUN have more in common with Doom Metal bands like MY DYING BRIDE (the song ‘Take Back The Light’ features a violin as kind of tribute, I guess) or later works of ENSLAVED and AMORPHIS. Which means song-structures far away from extreme Metal and, especially when clean singing is used, having more in common with mainstream alternative music than Black Metal. A song like ‘In The Pouring Rain I Lie’ has, despite the short Black Metal part in the middle, nothing in common with music that gets usually reviewed on this side. In fact all ingredients like electrically distorted guitars, forceful drumming and aggressive vocals are sparely present. The song ‘Seducing Voices’ reminds me, due to its dynamic, of a band like THE VISION BLEAK. Only such moments of more dynamic and compelling are very rare to find. So I guess you have to be very, very open-minded to give “Black Molten Essence” a try. But you will be rewarded by some fine melancholic, slowly developing music with an overall feeling of sorrow and grief. Personally my feet are falling asleep when listening to such music, but that is my personal taste. Anyone interested in above mentioned bands, especially MY DIYING BRIDE, such definitely take a listen and visit www.facebook.com/hraundoom or www.fda-records.com