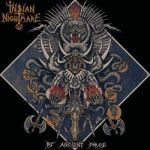 INDIAN NIGHTMARE was founded in 2014 and like a global force united; this band composed of musicians from Indonesia, Italy, Mexico and Turkey. As self-proclaimed Tribal Metal Punks, the quintet put up their tent in the German capital Berlin and quickly established themselves with their novel take on Punk, Speed, Heavy and Thrash Metal. By making the members’ of different cultural backgrounds almost blatant, their 2016 debut “Taking Back The Land” offered a remarkable variation on the genre template, that the youngsters were hailed as newcomers of the year by conscious fans and followers of the underground. Continuing the creation, this furious outfit is back with their sophomore album “By Ancient Force”, which is now released worldwide via prestigious High Roller Records. This record comprises of seven songs, leading to a running time of 41 minutes and continuing the traditional imprint of ’80s Metal. The quintet tried to keep things musically as authentic as possible by recording the album live, which gives the whole listening experience a vintage analog vibe. Side A, opens up with ‘Bastions Of Nightmares’, which quickly moves at an consummate speed, while the vocals howl above everything. ‘Incursions Of Death’ is like pack full of energy, begins with thrashy heaviness before everything drops into silence and again the tempo begins to pick back up leading to a head-banging inferno, reminiscent of early SLAYER. With ‘Serpent’s Eye’, you will get that old school Punk atmosphere and like a wild force moving its hostile riffing, enraged solos and high-pitch screams, will takes you back in time of AGENT STEEL. The pacing of the album is unrelenting and the riffs come heavy and hard, which is totally evident in ‘Land Of The Damned’. Side B, starts with ‘Yang Terampas Dan Terhisap’, initiated with a flowing MAIDENish melody. It is one of the most fascinating tracks of this whole record. This entire song is sung in Indonesian, which, by the way, pretty much means nothing as per Google Translator – maybe a reference to the Chairil Anwar poem, “Yang Terampas Dan Yang Putus,” or maybe about some spicy Indonesian dish, only they know! But, what is absolutely certain about this track is – with its rolling thumps, hyper-pace, shrieking guitars and potent vocal flare, it’s the magma force of the album. You may not be able to translate what Poison Snake (lead vocalist) is uttering on this track, but you can be assured that – it’s about living, breathing and dying Rock’n’Roll. Finally, appeared ‘Set The Spirit Free’, a straight-forward Metal headbanger and ‘The Awakening’, where the band takes a collective breath, a furious riff starts to build and then all hell breaks loose; a seven minutes closer, it’s became the anthemic and varied finale. “By Ancient Force” is an unusual but unique sounding release by INDIAN NIGHTMARE; a journey back in time. Definitely recommended for fans looking for fresh and inventive bands in the zones of Punk, Heavy, Speed / Thrash Metal and want to have an adventurous experience that will hark back to wild and glorious 80s. Explore more about the band at www.facebook.com/indian-nightmare-1564014753877177 or visit their label page www.hrrecords.de