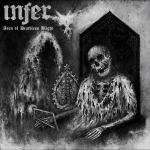 Slovakian outfit INFER was formed back in 2002. So far they have released three albums, one EP and one split CD. And “Aeon Of Deathless Blight” is the fourth full length release in their respectable 18 year career span. Upon first hearing, the album opener, ‘Vision Of Primal Horror’ was kind of confusing. Its long guitar chords and deep growls had me expecting some Doom / Death Metal. And it sounded pretty good actually. But as soon as the second track kicked in, I was thrown back by a huge blast of heavy, aggressive and fast Death / Black Metal. First things first: the overall sound is huge. The production values are in par with any other big names in the global underground. The guitar tone is crushing, the bass is present and heavy and the drums pound their way into your skull right away. It was recorded / mixed in Slovakia and mastered in Endarker Studios, Sweden, where such bands as MARDUK, RAGNAROK and POWERTRIP, just to name a few, have worked too. So production wise, everything is top notch. There are a couple details that I noticed from the start: the drums are a bit too prominent in the mix and the snare drum sound was really hard to get used to. But once I got past those things, it was all good. As stated above, Richard’s bass is really prominent, which is good. He follows the guitar most of the time, but you can feel how tight his playing is. Especially when you got blast beats coming in and out in most of the songs. Which takes me to drummer Robo; his performance is really precise, including relentless double bass and fast, recognizable fills. Last, but not least, Peter’s guitar riffs are sharp and detailed and his vocals are so strong and solid. This is what you call a “Power Trio”. Basically, INFER’s “Aeon Of Deathless Blight” is a tour de force in Death / Black Metal. At an average of 4 minutes per song, this album just bashes your head relentlessly in just 35 minutes. They are not bringing anything new to the table, but the work, the attitude and the conviction really shows. This is one strong Death Metal album from a really respectable band. Contact them at www.facebook.com/infer666 and get their album from www.nigredorecords.org