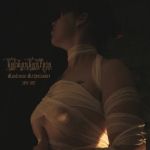 The name KALMANKANTAJA crossed my path for the first time a few days ago. Thus I was pretty surprised to see that “Kuoleman Kehtolaulut 2014 – 2017” is a triple CD package with a running time of more than three hours. My first thought of a kind of “Complete Discography” release was soon thrown into disarray when I found out that KALMANKANTAJA has an extremely huge discography. Founded just eight years ago, the Finnish band has recorded no less than elven(!) long players to date. And that’s not all they put out. Ten EPs or demos add to their long line of releases, as well as nine split-releases that are nearly completely collected on this release, in chronological order. In addition, there are four compilations, with “Kuoleman Kehtolaulut 2014 – 2017” being the fifth. Pretty impressive for such a comparatively short time of existence. I think it must be hard to work as a full band to be this productive. And in fact KALMANKANTAJA is mainly the brainchild of Grim666, who played and still plays in some not that well known bands. He is responsible for all the music of KALMANKANTAJA, only supported by singer Tyrant from MALUM (as a full band member) and some live musicians. Listening to the 18 partly extremely long songs, I somehow was not surprised to recognize that KALMANKANTAJA are rooted in Black Metal. Yet, they aren’t trve or kvlt, but dark, doomy and sometimes depressive. Especially the older songs are of the latter kind, it is no wonder that the first song is titled ‘Melankolia’. This 21-minute opus spreads nothing else. In the long run, the depressive turns into a more dark and gloomy atmosphere, with some fine songs like the slowly accumulating, rather monolithic ‘Unohdettu’ or ‘Varjojen Valtakunta’. Yet the most melancholic tune is waiting at the end of the second disc with the extra long ‘Virvatulen Henki’ (running more than 26 minutes). This one sounds like a MY DYING BRIDE song played by a Black Metal act, which is nothing less than a compliment from my mouth. But despite the mentioned highlights, the first two discs of “Kuoleman Kehtolaulut 2014 – 2017” are not completely convincing, since there are some lengths as well, thus some songs tend to be boring. It’s up to the third disc, featuring the most recent recordings, to change that. And in fact it does! Overall, the songs of KALMANKANTAJA are more intense and atmospheric here. In addition, there are more real highlights, like ‘Uni Ja Kuolema’ that surprises with guitar harmonies reminding me of some 1990s Alternative Rock. The pretty driving and epic ‘Uuden Maailman Tulessa’ is as much a killer as ‘Tuhkasta Noussut’ with its elegiac hooks. And in the end, the compilation finishes worthy with ‘Metsänkulkijan Paluu’, an atmospheric and harmonic tune with ear worm qualities. And even though I will make no secret of the fact that it is not all that glitters is gold on “Kuoleman Kehtolaulut 2014 – 2017”, it will not be a mistake to check KALMANKANTAJA out, if you dig Black Metal with a darker atmosphere, since there seems to be much to discover in their extensive discography. Visit them at www.facebook.com/kalmankantaja-211871848850139, or check the label responsible: www.gsp-music.com