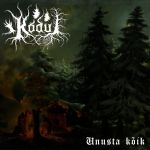 “Unusta Kõik” is the debut album of this Black Metal band coming from Estonia with an Italian female guitar player. Although this is a new band, their members have experience in other bands and in other music styles. The final result is a Black Metal band that sounds like old MASTER’S HAMMER, with the obvious BATHORY influences and some early EMPEROR references, but with a very heavy dissonant way of composing, that gives the album a very unique approach. I can also mention that VOIVOD’s spirit lives in here. The overall concept of the band is related to their native land, nature and the mystic forces within. The music is at times complex and it does not follow the more common way of composing as many other bands. That reminds me of some VED BUEN ENDE’s way of composing or earlier THE CHASM, where melody is done in such a psychotic way that it seems to be out of place, and yet it fits. There is an epic aura in the songs where the images that come to the mind of the listener is of pure despair. There is also a good dose of old school evil Thrash, like in the song ‘Ma Köngen’ with a very early SLAYER influence through the song and even I can sense some old South American evil Metal influence here and there. This is the kind of album where every time you listen to it you can find more and more things making it a very interesting experience. Although the dissonant way of composing might not be everybody’s cup of tea, there is no doubt the band is trying to make music that is out of the ordinary and offers a challenge to those who dare to take this devious path. www.facebook.com/kodublackmetal, www.facebook.com/nigredorecords