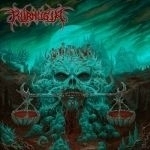 This band has members that were involved in the 90s Death Metal band DECREPIT and also EMBALMER, so in fact I was expecting a similar style with this band. But no, it is quite different. KURNUGIA (formed in 2012) is like a 1-0-1 for what Death Metal was done in Finland and a bit of the Tri-state sound (area near New York). The sound of the band has also some influences from the Swedish bands, but more in the vein of CREMATORY and CARNAGE, which means creepy, eerie melodies with heavy riffs, tons of distortion and fast. The music shows variety, mainly in an upper tempo speed, but they are no strangers to play in slower moods, yet always with that dark-aura riffs that sound as if the reaper itself is around those about to die. The only complain is the vocals. They are the same almost all the time. The very few times they add something more than a low-deep growl, it sounds good. But it basically sticks to the undecipherable thing, and let’s face it, although it is a trademark for Death Metal to have guttural vocals, there are styles within, that work for some and other just don’t. Whereas the same vocal style works for EMBALMER (the main band of the vocalist) and more in the American style, here where they are more into the European vein, they just don’t fit that much. Maybe it sounds too dry or needs a different mix, or something else. They have the music, they have the lyrics, they only need to approach the vocals different. There is a quite good cover from early SENTENCED that talks about where this band’s influences come from. And the fantastic artwork is also something to notice. If you are into old school Death Metal from Finland with touches of brutal American Metal, this will surely be for you. www.facebook.com/kurnugia, www.memento-mori.es

Julián “To The Cursed Depths” Núñez

Julián "To The Cursed Depths" Núñez