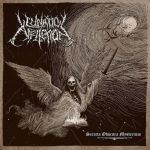 This album, released on the very first day of the new year, is the second full-length by LUNATIC AFFLICTION, a German band that plays a kind of melodic Black / Death Metal not far from bands like EMPEROR or DISSECTION. "Cosmic" and "symphonic" are also adjectives that come to mind and that the band themselves use. All the song titles here are in Latin (except the instrumental intro and outro, ‘Alpha’ and ‘Omega’, which are the first and last letters of the Greek alphabet and often used to mean beginning and end), but the songs themselves are sung in English. Said intro and outro, by the way, seem composed for some Lovecraft inspired movie, and mainly ‘Alpha’ is very "cosmic" sounding. This attention to atmospheric detail is very much present in all of the songs, mainly through the use of keyboards. Technically the band is great, and the vocals are aggressive, appropriate, and reverb-ridden as befits the depths of the abyssic space, all of this with an adequately powerful production. Everything sounds grandiose and menacing, from the more atmospheric pieces to moments of pure angry speed in songs such as ‘Iter Resurrectionis’ with its lambasting drums. I also enjoyed songs like ‘Infans Lunae Et Lactens Astrae’, that rely more on composition and that show some interesting variety in drumming and riffing. The only complaint I may have is that it often follows too closely the paths trodden by the innovators of the past, but it is very well composed and very well performed. So, in case you are into this kind of heavy and fast yet melodic music, this may most likely be a welcome addition to your collection. You will find out more about LUNATIC AFFLICTION at www.facebook.com/lunaticaffliction, label contact: www.kristallblutrecords.com