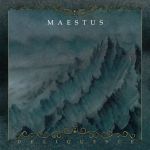 It’s always been a bit of an enigma how music so beautiful and mesmerizing can be lumped into a genre known for its aggressiveness and heaviness. Bands like DRUDKH or SWALLOW THE SUN can create melodic, slow-paced tracks while still carrying the essence of Metal. And Portland, Oregon’s MAESTUS have done just that also. With their second full-length "Deliquesce", the band (whose members have been involved in more bands than I can possibly name) have written a culmination of ambience, gorgeous melodies and emotional depth that hypnotizes one moment and stupefies the next. The mature sound of the band doesn’t steer away from Black Metal vocals that rasp and growl without seeming overdone. The opening track ‘Deliquesce’ gently enters with a keyboard-laden ambient atmosphere until around the 2-minute mark when guitars bleed through the open wounds as the drums casually thump thump like a slowly beating heart. Halfway through, everything slows down to a snail’s crawl, unfurling a segue into a thick fog of heaviness without gaining much speed at all. ‘Black Oake’ is a ruptured soul of a track with its faint keyboards in the background and the fuzzy, despair-drenched guitars and vocals. The song traipses through a melancholic land of swirling electric strings and steady drumming. ‘The Impotence Of Hope’ (a fitting title) mixes some piano with acoustic guitars creating a vast beauty until the heavier guitars slowly thrum and melt throughout the overall miasma of the song. A more Death Metal guttural voice takes dominance over the Black Metal vocals interspersing along with it. And rounding out the 50 minutes is the fourth track ‘Knell Of Solemnity’, which continues the consistent flow of the album. MAESTUS is a band who firmly grasp the concept of subtlety while never once letting go of their Metal roots. So just sit back, dim the lights, drink your favorite alcoholic substance and simply enjoy the fucking epic journey that "Deliquesce" will take you on. For more info, check out www.facebook.com/maestusdoom, www.code666.net