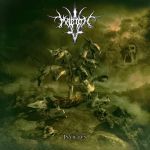 The good thing in working for our legendary magazine (apart from fame, booze and women) is that you always discover bands you might would miss out. Until now I missed out on MAGOTH from North-Rhine Westphalia in Germany. Active since 2011, they celebrate their 10th anniversary with the release of their third album “Invictus” and it is their first release on a proper label, which they found in Ferocious Records from the US. The intro ‘The Reckoning’ starts with some dissonant guitars, before ‘Entering The Cavern Of Grief’ is turning into a thunderstorm of melodic Black Metal. Maybe melodic is not the right term to describe the material, as it is surely grim and freezing, but anyway far away from the Norwegian – styled stuff. Maybe a blackened version of NAGLFAR with less harmonies, but still melodic would be a good hint. Only the drum sound is inspired by the Grieghallen sound sometimes. Anyway, the band still leaves space for some harmonies, which fit pretty good into their sound. What I also like is the 90s charme the song is spreading. ‘Possessed By Anxiety’ has a Death Metal touch and the technical drumming and guitars remind me of some of the Polish warriors around, before it turns black again and again these disturbing dissonant guitar tunes appear. ‘Cain’ starts very melodic and a warm lead in the back and the raw vocals, combined with the melody, are really catchy and pretty cold. The drumming in the middle is pretty memorable and the spoken passages are varying the material and honestly the album and its material is growing from song to song and this one is the first outstanding one. ‘Ascension’ is another one with brilliant drum-work and pretty brutal when they increase the speed, before it gets varied again in the middle section by slowing down a bit. ‘The False King’ is also blood-freezing and a fast riffing monster, with some Speed and Thrash Metal vibes in it. The title track ‘Invictus’ is slower again, with grim vocals, but the band keeps the last treasure for the end. ‘Resurrection Of A Deceived God’ starts slow, but turns into a blizzard after some seconds and shows the quality range of the band. Yes, all of the tracks have the Swedish trademarks, but MAGOTH managed to incorporate them into the material without sounding likewise any of the well-known bands. They clearly understand how to create some unique songs without sounding like a bare copy. It also takes a while to get into the material, but after two or three spins it unleashes its quality and matured songwriting. I will not drop too many comparisons, but after THORMERSIS and MORGON another force appeared in the German Black Metal underground with unforseen quality. So, go and support your local Black Metal underground: www.facebook.com/magothblackmetal, www.facebook.com/ferocious-records-303267749801602