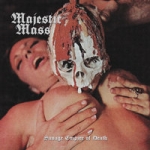 MAJESTIC MASS are hailing from Denmark and were totally unknown to me so far. Their debut release "Savage Empire Of Death" gets opened by a promising keyboard intro with spoken passages and already spreads a pretty darkened atmosphere. ‘Clandestine Supremacy’ sounds like a demo track from the early 80s. Their style can be described as blackened Heavy Metal or Black’n’Roll with some slight influences of Thrash Metal. The production is very raw and really sounds like an old demo but somehow spreads a certain charme which caught me after a while. With ‘Sanguine Dreams Of Lust’ the band even goes a step further back in time and the track sounds like a 70s version of blackened Heavy Metal with a good doze of DEEP PURPLE in it. Honestly I had my problems back in the days when CATHEDRAL got more and more weird but these guys are really enjoyable and even if this sounds strange, they sound really fresh and as I was a bit bored in the last months with too many mid-class releases in our genre, this is something which brings some fresh vibes. ‘Chaos Delight’ is another small highlight with its menacing memorable melody and bass-line and a real little treasure of this good diverting output with a classic Heavy Metal part in the middle. ‘Majestic Mass’ has some Black Metal influences from early BATHORY releases combined with the dirty edge of early MOTÖRHEAD songs. ‘Those Of The Night’ continues this way and sounds again very BATHORY influenced before the last and title track ‘Savage Empire Of Death’ is very enjoyable again with its Rock’n’Roll vibes. Rounded off by a cool old school cover artwork, it is good that Iron Fist has picked up this output and spreads it in the underground. Definitely worth to check and more info can be found at one of these locations: https://majesticmass.bandcamp.com, www.facebook.com/ironfistproductions1