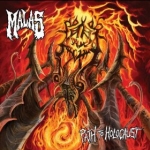 Second album of this Chicago based band that has been dwelling in the underground a long time ago. The main difference with their debut “Conquest” has to be a better production and a more defined style. This is the perfect mix of Death and Thrash Metal, pretty much in the vein of early MALEVOLENT CREATION or DEMOLITION HAMMER, but with a twist of their own. With this said the main influences are SLAYER and faster parts of early CELTIC FROST. So, in this age, we have a band that is almost alien to the influences of any band past 2000 and that still sounds actual. The guitar work is quite direct and in your face, it reminds me in more than one way of MASTER. The vocals are also quite different from most of the Death Metal vocalists, with the rough Thrash Metal edge to it, but more in the extreme Thrash Metal sound. References to DEVASTATION from Texas can also be found here, and what also makes this quite interesting is that I can sense a “Seven Churches” vibe, although the lyrical approach is quite different. If you like evil Thrash / Death Metal, with a good production, which sounds modern but not over produced, and killer and direct riffs, which has zero originality but 10 in intensity, this is for you. Fans of early SADUS and MERCILESS this is as good as extreme Metal without being noise can get. MALAS refer to evil in many ways, and it does show! www.malas.biz, www.facebook.com/pages/malas/375911577717