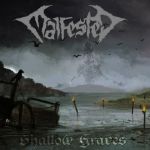 “Shallow Graves” is the debut EP from Belgian outfit MALFESTED. Belgium has had some pretty well known bands (ABORTED, BLASPHEREION and LENG TCH’E to name a few), and MALFESTED carry on the Belgian legacy of high quality Death Metal. There are a bunch of influences from the 90s (and maybe some late 80s bits here and there) that you can notice across these 6 songs clocking at 21 minutes. One can’t deny some modern sounds get thrown into the mix, but that doesn’t deter MALFESTED from bursting out a bunch of great and memorable riffs courtesy of guitarist Niels. Arne’s vocals have a nice range, using really low growls to a mid grunt and even some high pitched shrieks here and there to accentuate segments. And although I could not get info on the other members, their performance is absolutely stellar. All of these elements make “Shallow Graves” a really interesting listen, since they go from all out DEICIDE to AT THE GATES and everything in between. The song structure is amazingly well done. Most of the songs don’t go past the 4 minute mark, but they are all packed with a handful of tempo changes. Curious enough, although there is a good amount of aggression and sonic violence down the road, there are certain slow parts full of melody and arpeggiated chords that add variation and atmosphere. Also, there is a concept behind this EP, as explained by the band that this release “tells an epic tale about a great battle against an unstoppable evil force”. Production here is top notch. Every instrument has its own space and the vocals sit perfectly in the mix, which is clear yet it has enough grit and bite not to take anything from the overall sound. Conclusion: “Sallow Graves” is an amazingly solid debut from yet another great Belgian band. And I am already looking forward to their next release. Go get their album and contact / support the band here: www.facebook.com/malfestedbe