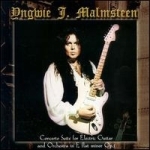 For years I have asserted that the two most powerful, emotional and extreme forms of music in the world are classical and Metal. Part of this, I know, stems from my upbringing on a steady diet of classical and orchestral music with little knowledge of "rock" music, that is until the mighty Iron Maiden stormed these American shores in the early 1980s. What has always amazed me about such a conservative form of music as Metal is its breadth. Under the "Metal" banner we can find three chord wonders like Hellhammer and an Yngwie Malmsteen. Even after immersing myself in Metal back then, I held fast to my classical music. Then in 1984 came an album called "Rising Force" which blended perfectly the elements of classical technique and metal performance, and it remains a watershed Metal release. Of course there are many worthy guitar "heroes" out there, and each has their own particular style and gimmick. Some have adopted what has been called a "neo-classical" style, but Malmsteen’s technique is almost completely classical in approach and execution. I followed Malmsteen’s career through "Trilogy," and remained satisfied with those first three albums for well over a decade. When in 1998 Yngwie released his "Concerto Suite For Electric Guitar And Orchestra In E Flat Minor Op. 1," there was little fanfare over here. It was sometime later that I managed to track down a copy, and what I found was what I consider to be a milestone in modern music. Now we have a live version of that album which includes several other pieces performed with the New Japan Philharmonic. Apart from the orchestra album pieces, Yngwie includes an orchestra-only arrangement of ‘Black Star’ which brings to mind emotions of Beethoven’s 5th Symphony 2nd movement; plus a ripping version of ‘Trilogy Suite Op. 5’, ‘Brothers’, and an encore of ‘Blitzkrieg’, and the ultimate Yngwie track, ‘Far Beyond The Sun’. Obviously this album is not for everyone. I’m a guitarist that loves classical music, so of course it is my cup of tea. Many metallions are not interested in anything but Metal, I know. And in a strange inversion of what Metal was supposed to be about, some simpler minds even despise guitar solos. Several "Metal" bands have and are trying their hands at performing with orchestras, usually with substandard and downright embarrassing results. But what Malmsteen has done with orchestras in the last several years is not only stunning, it has made many in the classical music community sit up and take notice. As if there was any doubt before he did these orchestral albums, Yngwie Malmsteen is a pioneer. Love him or hate him, you must respect what he has done.