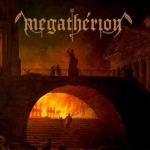 MEGATHÉRION is a new act coming directly from Germany’s awesome underground scene. In fact, the band is composed of Magma (bass) and Aethon (guitars), both well-known musicians from mighty EURYNOMOS plus Summanus (drums) and Carnivore (vocals). They are labeled as a Black / Thrash entity and in my opinion, MEGATHÉRION is strongly influenced by classic bands like HELLHAMMER / CELTIC FROST (just read their moniker one more time), old BATHORY, old SODOM, FLAMES OF HELL, BULLDOZER, SLAUGHTER LORD, etc. This, their first production, is an almost 20 minutes 5 tracks EP released last month by Iron Pegasus. The first thing I noticed is that the intro sounds similar to MINOTAUR’s ‘Into The Temple’, the first track from their classic debut “Power Of Darkness”. Right away after this short intro starts ‘Megátherion’, a classic Black / Thrash attack that is really close in sounding and style to the aforementioned Swiss gods. ‘Secret Invocations’ is the second song and is one of the finest here. You can hear some BATHORY influences from their very early days. ‘Invading The Crypts’ is the following track and it continues in the same way of the previous two tracks. The next one is ‘Built For Sin’ and the first riff sounds like the Canadian monsters BARROW WIGHT. Then this track becomes a HELLHAMMER / CELTIC FROST worship in its purest form. The last track is ‘Burning Arrow’, that is nothing but the same I already heard before so everything here is very consistent in terms of style, sounding and concept. You will find some great atmosphere and an old school vibe that can’t be denied. A properly production and some well done Black /Thrash compositions make this effort a good debut, but far from outstanding. Follow their steps at www.facebook.com/megatherionofficial. Get it at www.iron-pegasus.com