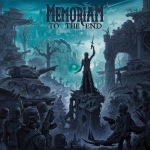 By now no introduction is needed anymore as to who MEMORIAM is, as this is already their fourth strike in their fifth year of existence, so we can talk about a prolific band here. While the previous album “Requiem For Mankind” was more of a sombre and doom ladden affair, “To The End” is charged with explosive energy, full of adrenaline before the battle expectation. A classic BOLT THROWER opening riff starts ‘Onwards Into Battle’ (one more time!) and drags you into a slow paced Death Metal vortex. The band once again worked with Russ Russel, but this time went for a more crusty, sharper sound instead of the dark brooding predecessor. It also starts another trilogy of albums, so it’s a prequel to the final battle that was going on before, as told in the unfolding story that carries on throughout the album and is masterfully represented in a Dan Seagrave painting. The second track ‘This War Is Won’ picks up the pace, clearly throwing bolts all around with War God’s benedictions roaming through the speakers, all the stuff that you dig for when going for a MEMORIAM record! Still it’s easily noticeable that the band started to add some crustpunky grenades to their arsenal, that keep things much more interesting. Once again loyally bulldozing everything with the first four tracks, the album slows down on ‘Each Step (One Closer To The Grave)’ that takes the slower, gloomier twist of the spear with profound yet earthly lyrics, cutting really deep. By now you’re definitely hooked but the cannon is still half full with raging explosives. ‘Vacant Stare’ and ‘Mass Psychosis’ employ militant, KILLING JOKE like beats shrouded in punchy, brain crushing riffs of highest calibre. The closing song ‘As My Heart Grows Cold’ is a melancholic, monumental sounding beast, a real hymn of death, proving without any doubt that the MEMORIAM machine is firing on all cylinders and “To The End” will make your blood boil and force to bang your heads to the maximum capability. You can check ‘Onwards Into Battle’ here and ‘Failure To Comply’ here. For album pre-orders please visit www.reapermusic.de. More band information you will find at www.facebook.com/memoriam2016